Live from my coffee table

For a while I've been meaning to show and tell my new house plants bought when we took the HG Mum out for a posh cake and coffee at a lovely garden centre cafe on the coast. I spied the twins as I'm calling them and thought of my lovely bloggy chum for 100 years John at first and then my Mum and my 70s childhood and being the marketing man's dream I was persuaded by the advertising slogan - 'air cleanser' ( laughing at myself now, honestly! )

It was because the reading of John's blog was fairly fresh in my mind and his post which you will find HERE thus gave me some happy childhood memories.

And then, for two reasons I decided to post my coffee table as it is to show you the twins.

Reason 2. I would have been moving to get the eye pleasing social media shot, ie shoving all the crap out of the way and again, I cannot frankly be arsed to move.

My house is fairly roomy, but if there's a flat surface. it get's stuff dumped on it. I seem to go about moving stuff and being able to admire the lovely wood but the minute my back is turned there's something else there!!

So let me talk you through the messy coffee table. Admittedly most of it is mine. Some of it should be there. Most of it not! 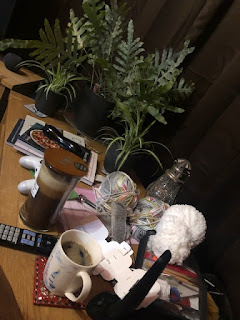 Its a shot from above for my seat on the sofa - my coffee being closest to me. If the clutter is making your teeth itch then zero apologies from me! Zero interest in minimalism here. Marie Whatserface can bugger off with her  Kondoick sparking joy get rid of it ways! She doesn't spark joy in me so ..... hahahaha
So what have we got? 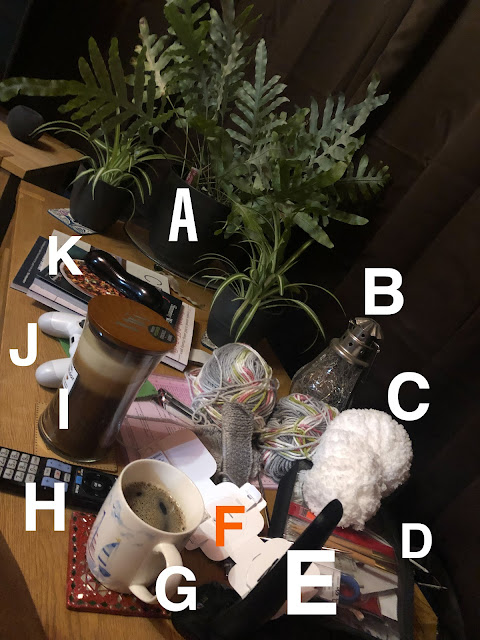 A. My plants. The fern thing, somehow, inexplicably I have managed to keep alive for a few years now. Admittedly it has been as bad as one last solitary leaf remaining. Fortunately it is ok with severe neglect. I am trying though and have put in a drip feed bottle thingy in the soil. I am a bit famous for plants coming to my house to die! I killed off a perfectly healthy Bonsai tree in a matter of months! The twins are little spider plants - real name on John's blog!
B. My lovely lantern that I have had for about 20 years now. It has some battery operated LEDs in it at the minute, but I do sometimes put a real tea light in it. It was bought from one of my favourite shops ever that used to be in town in the late 80s early 90s- it was called Internationale I think and it was FULL of nick nacks for the home and bits and bobs. A bit like TK Maxx Home bit - but cheaper!
C. Knitting wool and beginnings of a hat. There are two ribs there because it was from when my Ma in law who has mixed dementia was here, I got her knitting again. It was a step by step thing. I told her how many to cast on - it took a while and she counted it over and over but then she was quite happy k1p1 away for the afternoon.  The fluffy white wool is called snowflake and its a right bugger to knit with. I'd decided to do the hat in it. I did the first two rows then had to make tea - I passed it over to Ma who said she would carry on for me - when I cam e back - it was like when I tried 1678 times to teach my daughter to knit! Dropped stiitches, knots, twists! So that's when I got the chunky grey wool out and we both did the same so she could look at mine and see she was doing it right! I've not moved it because I like seeing it there. It's on top of the patterns,
D. Is my small pouch of knitting stuff - it mainly holds my knit pro wire needles. Best things I ever tried. I've a few wires and lots of interchangeable ends covering most of the knitting sizes I need. There's the little key for changing the wires, stitch holders, sewing needles - the eagle eyed of you will maybe spy some new packs of needles and holders - I am spoilt by the HG. There's a pen, tape measure, also the broken end off an ariel off a tape deck machine we no longer have! My notebook for following a pattern is there too.
E. Looks funny at this angle but it's one of the house phones
F. Rubbish from something Mr 24 bought - maybe a charging wire or something. I will remove that when I get up!
G. My early morning black coffee in a Sainsrobber's mug from years ago on one of the glittery mosaic coasters also over 20 years old that normally is only out at Christmas. Its there because I missed putting it away and I like it.
H. One of the TV remotes that should be in the holder next to the TV
I. One of my Christmas presents from Mr 24. A Woodwick cafe latte candle. It's one of those that crackles. It's on the coffee table because I moved it from it's home on the fireplace at the weekend because we had a roaring fire going and I didn't want it to get too hot and melt. I've not started lighting it yet.
J. The play station control because Mr 24 has brought his Playstation down as he pays for Disney+ and that's what we view it through. Again - should be next to the telly!
K. Pile of newest books in the house with the TV remote on the top where I will have dumped it last night before going to bed, instead of in the holder not two footsteps away next to the telly with the rest!
The books are
Slimming world's fast and free - recipe book  then it's 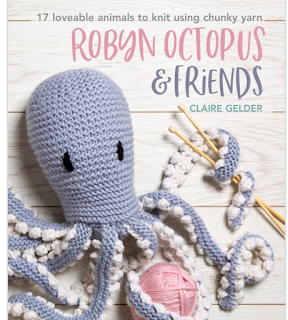 A present to myself from some of my Christmas money - it popped up on Instagram and I fell in love with it. 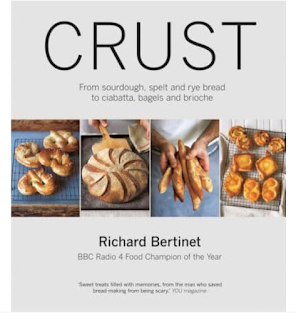 Two books as a present from the HG. We have so many books we could open a book shop. Not tried any of the recipes yet but a flick through has me salivating. 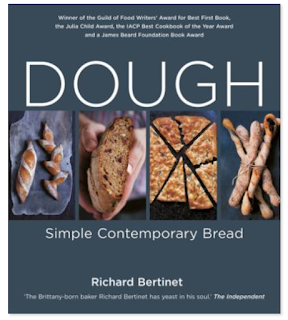