The tiniest bit of up cycling, gardening and a fond farewell.

Well it’s Wednesday of the first half term and it’s warm up North.

The title refers to this little project what I just did.

I’m outside. Saying two fond farewells. One to the gorgeous mini daffs in the build it yourself planter I got from Miss 25 for Mother’s Day. It came through the letterbox! Very clever. That and it’s plastic liners will be reused for a little bit of flat leaf parsley growing.

And the other farewell is to my beloved purple wellies. I’ve had them nigh on a decade. They watched the Olympic Torch pass through our city on the wettest day ever in the world. I don’t think I’d had them long. They have served me well. The HG bought me a new pair of purple wellies two years ago to replace these and I’ve been wearing them ‘one last time’ for two years! Always by the front door, ready to put on. They’ve been tight on my legs, then roomy and on the way to

Snug again! They are actually children’s which is why they are probably a bit work on the heels.

Anyway. The HG drilled some holes in them for me. I’ve added pebbles and compost, I’ve planted the daffs from Miss 25 and sprinkled some seeds on the top and topped with the moss that came with the daffs. I’ve placed them in the garden and all is well. 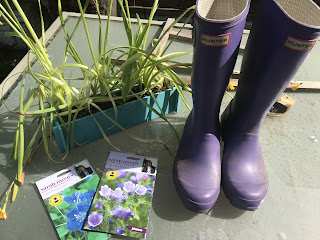 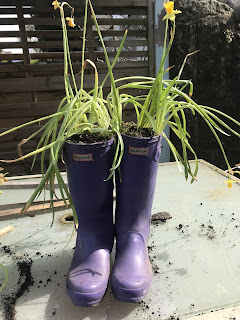 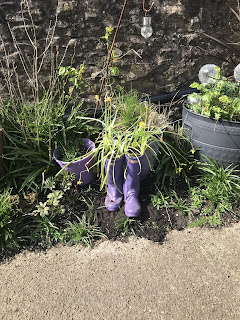 Bluebell is playing with her new ball I bought her. It’s a kong supposedly indestructible 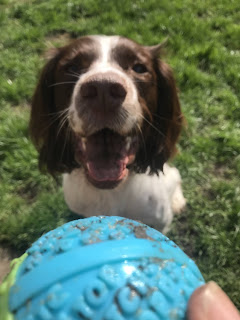 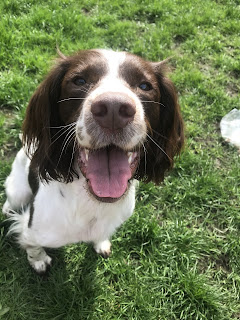 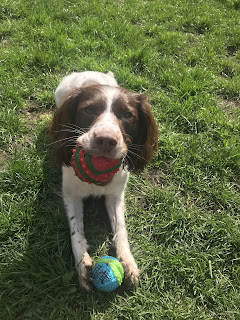 We are going to go for a short wander later as we did 7 miles yesterday. That was 20,000 steps for me! I suspect though, she did more than thrice both my stats! She had a first dip in the sea. The shore was packed full of socially distant groups and it was so lovely to see all the not that socially distant reunions going on. I chatted to a few elderly dears out walking on their own and we revelled in the joy of the happiness all around.
I’ve seen one of my sisters today and will see
My Mum tomorrow as the forecast is still good, then my boy and the HG are at home from Friday and all will be well.
Have been doing a little bit of knitting and enjoying it. Hand on heart out of all
The creative things I do, I think I love knitting the best. Though so definitely need my glasses the most for that one!
Hope your days are lovely.
Lots of love from
Rachel *needs to shave the bottom of her legs and get the 3/4 leggings out* Radiostar ( even though snow is forecast for Monday! )