Well, it's a wet Monday morning. We were woken early by a barky Bluebell - this is a new recent thing - it is lighter in a morning, but she's never woken before us and barked. Nextdoor are up early and they are really really LOUD so I wonder if she hears them and thinks that its time to be up? I mean we are early risers anyway but I much prefer waking up without a barky dog!
Anyhoo, I've been up. Made the HG lunch - he is back to work - very safely social distancing - he's got corned beef and brown sauce sandwiches on wholemeal bread - emptied the dishwasher and sided all the pots. Moved some washing, tidied up a bit. Fed the dog and am now languishing in bed with the laptop for a bit. I've done an online shop to be delivered on Sunday - mostly household cleaning stuff - my oven is atrocious! Still no flour available to buy online. I do know shops and bakeries are bagging it up themselves but not available to order it there in the online store.

So after a busy week at school, again it was nice to have the weekend feeling like a weekend as we'd both been at work.  Over the weekend,  we did weekendy stuff ( basically lockdowny stuff but on a Saturday and Sunday.)
Apparently it was national baking day yesterday but I just could not be arsed. I rallied and made a cracking roast beef Sunday dinner but that was about it. 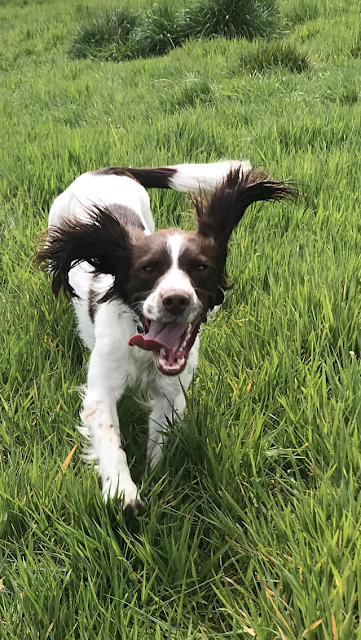 So I am working from home this week and then it's actually Half Term next week and the head decided our school will close for the half term and has said that all staff must not do ANY school work whatsoever. I'm totally fine with that. There is a local childcare hub for key worker children who come to our school over half term if needed. Then the plan is we have INSET day on June 1st so we will be seeing what is what then. I'm half minded over the opening of school really. I am concerned that children of families who have not been socially distancing will be then mixing with those (of us ) that have been, which makes all the strict lockdown stuff  all seem a bit pointless. The way the Govt say half a class in each classroom etc and the guidelines will be very difficult to put into practice, but if they say we have to, then we will. However, I do not believe many of our parents will send their children in if they don't have to. Maybe it is too soon. Who knows? Only time will tell. If mine were Primary age then they would only be going back as a last resort.

My sister said
" They wanted to flatten the curve so the NHS can better cope.....well I do not want to catch the Virus, they said more cases will happen but we will be in a better position to deal with it. They said they would be better prepared to deal with more cases. Well I couldn't care less if Florence Flipping Nightingale came back to life to nurse the sick, I don't want to catch the Virus! "

Wise words indeed that also made me giggle.

Even though we can now drive to destinations to exercise - which is what I have been dying to do with Bluebell, we decided not yet. We can quite happily exercise her and ourselves round here. We can wait until all the idiots get over the novelty and spoil it for everyone else. I am still managing with the deliveries of shopping. I did pop into Aldi on our dog walk to pick up some bits and bobs, but I did not wear a mask, and it was probably a 50/50 split of those who were. Social distancing was not too bad BUT the perspex at the tills was not thought out well for short people like myself! My breath was free to hit the cashier's boobs!! I was glad to get out though back into the fresh air. I am quite happy being in lockdown mode - except I am missing Miss 25 now. We are used to not seeing her as she lives away. I guess its the freedom of choice at the moment that I miss.  I think this CV19 is something we are going to have to be wary of for ever actually. Until there is a vaccine like small pox - eradicating it simply will not happen. That's my twopennorth that's not worth a ha penny!!


TV info - well, she says with a raised eyebrow and pursed lips, after seeing a couple of my friends rave on,  I watched a series called 'Normal People' on th'i player.  It is not one to watch with your mum, children or Great Aunt Gertrude in the room if you are a bit of a Victorian Prude like myself!  But oh my word, the acting was the most brilliant I have seen for a long time. The direction of the show, the way it brought the emotions it was portraying to life and it had me hooked and I watched the lot in two days flat!
I also started watching Killing Eve with the HG, but very annoyingly he watched the second one  through his eyelids so now I am in that quandary where I know I am going to break ranks and watch ahead knowing full well the sulking and performing I do when he does that to me!!
I heard that Car Share is available to watch again so that is a must. We also found a little road trip programme by Ralf Little and Ricky Tomlinson where they are travelling round the North in a camper van and it's been quite charming so far.
One non TV thing I am looking forward to is next Monday when BBCR2 are having a Popmaster DAY ! I shall probably park myself in my craft room for that one and enjoy to my heart's content.

I am making a SW lasagne today for tea - using butternut squash as the white sauce! I know! It sounds bizarre but I will try anything once and real people I know have made it and declared it delicious. I know some would say just have the white sauce but I am getting fatter by the day so need to take action! And a butternut squash has been sacrificed at the altar, cut up and roasted yesterday whilst the oven was on. I have the 5% beef mince and the quark! Let's see what happens!

Right I am now going to let the dog out of my room, the one who manages to open the door by herself to go down if I get the hairdryer out. Yet she's now just sat starting at it and squeaking forlornly as she heard Mr 23 still not back at work yet, go down for his daily porridge and toast!