4:11am is the moment Mr 18 got in.
My relaxing NYE in front of the telly  - DID YOU SEE PANDA BABIES? - got a whole heap frettier once we were informed that Mr 18 was going out with his friends into town.
I warned him about alcohol poisoning and that he could die.
I warned him about hypothermia- also he could die - I did actually make him go back and put  a t shirt on under his shirt because he was going out without a coat!!
I warned him to stay away from morons and dickheads who were just out looking for trouble.
I took his photo to mark the occasion ( and also so the police would have an accurate description image should they need it for when I rang them to say he's not come home ) ( I'm not even kidding!!! )
His mate Dave arrived to pick him up.
I told him to have a good time!!
I did!!
It was his first significant night out. I don't know if I worried more because he's my only child left at home, or whether it's because he's a boy or whether he's that much quieter and less social than his sister!!
My friends ( unhelpfully) reminded me of when we used to go out without a coat on and get absolutely leathered on Diamond Whites and vodka!! But the pubs shut at 11pm then and no club was open past 2am. And no one seemed to get stabbed and set upon for no reason.
Anyway, he sent me a Happy New Year message at midnight. Me and Jools woke the HG to do the same. I stayed awake what iffing till 2am. I sent the boy a text instructing him to come and wake me to let me know he's in.
At 4.10am the HG woke me to tell me he wasn't in yet. The HG hadn't really slept at all!! At 4.11am, just as I picked up my phone to ( RING THE POLICE ALL HYSTERICAL) see if Mr 18 had texted back - he had!! "OK" was his reply. The front door opened and in he rolled! The HG went to check him over to see everything was alright and he went straight to bed!!
I've been to check he hasn't choked to death on his own vomit and he's still asleep! He'll probably have a bad head! But also some happy memories of a great night out with his pals! Like I do, with mine!!
I'm glad this right of passage is done. This parenting lark gets harder!! Bring back toddler tantrums and potty training!
Today there is roast beef for tea. The Dining room will be de- decked and I'll knit a bit having not done any yesterday!
The first of the month and I forgot to say white rabbits!! Mind you I can't be that unlucky; I won £10 on the Postcode Lottery, I've two great offsprings and a lovely HG. There's food in the fridge and cupboards and it was payday yesterday! So until all the bills zap out electronically, money in the bank!! I've a job I love, hobbies to do, loads of friends.
I'm a bit of a spoilt brat compared to some. So 2016, lets be having you!
This picture made me laugh. 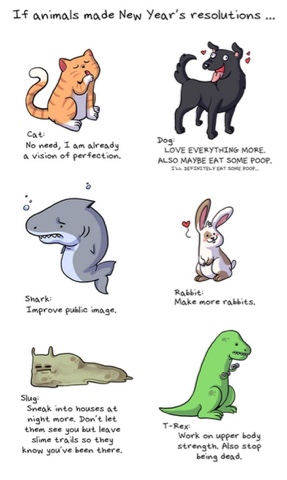 Email ThisBlogThis!Share to TwitterShare to FacebookShare to Pinterest
Labels: kids