Well hello lovely folk of Blogland, I'm writing this from my sickbed. Thanks to the germ ridden beings I spend my day with, I picked up the sickness bug that is doing the rounds. Yesterday was worse, today I don't feel as mangled - Yanno, put through the ringer! I've been catching up with those on my list and was inspired today to write about how lucky I am! Inspired by my gorgeous friend Tracey who writes Here considering what her old friends have achieved and comparing it to her.

Well, a bit of a revelation here.
I shot the sherrif, but I DID NOT shoot the Deputy!
If you know the tune, sing my next line!
I went to Grammar,  but I DID NOT go to University.

So there you go, I was ignored, then exiled!

I applied to Teacher Training and was accepted at all three establishments. ( You only chose three in the black and white days )  Cheltenham Ladies College, ( I WAS NEVER GOING TO GO THERE! )
Newman College Birmingham ( NOPE, NOT THERE EITHER!) and finally the now extinct North Riding College in Filey. It was a wonderfully warm and accepting small establishment. My Dad drove me over, my Mum had spent her week's wages on a smart Marks and Spencer's navy blue suit for me to wear at my interview days. I impressed the Dean. My offer was E E
That's right! I only had to get two points at A Level to get in!!
I got more than two points; I got ten points. But that was only in one A Level. (Domestic Science - which isn't just cooking !! )
Sadly for me, ( but was it - the thought of leaving home had me in free fall ) the rules were you had to have two A Levels. I failed General Studies. ( I FAILED GENERAL STUDIES!!! Thus makes me laugh now! ) and I failed Biology and French! FAILURE.
What an utter failure.

I still have the beautifully hand written letter from the Dean telling me to not give up, and that he was holding my place for the following year, that I hadn't to give up as it was clear I was a naturally talented Teacher and I just needed to pass my Biology A Level. If I could find it I'd show you!

But, a year at Night School proved a waste of time. I improved from a U to an N!!
I think the question on Genetics was what I failed on! It was too mathsy, for a gal who had to resit her Maths O Level.
FAILURE!

Anyway, stuff happens for a reason. I'm in touch with lots of the girls, I went to Grammar with. I do think the ones who went away have more money than me. But so what?! I'm actually not envious of any of them. There is nothing they have that I don't already. None of them look down on me ( I don't think ) for not having a degree, I certainly don't look up at them!

If I am in the mood for some deliberating comparisons, I look to the rich n famous! But actually, it is quite sad and turns into an ungloat.
It's all about needs and wants innit?

Me v Kylie
We are roughly the same age give or take a few.
I loved Neighbours
She was in Neighbours.
There the similarities well and truly end.
I might be lamenting the size of my arse.
Oh, to have a bum like Kylie's in those gold shorts. 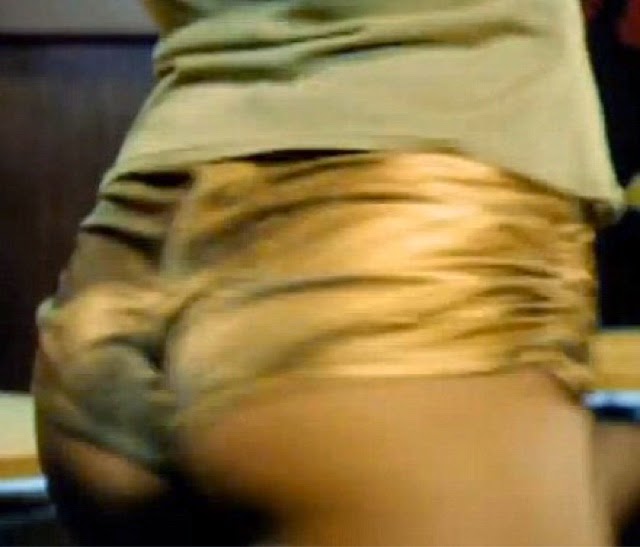 But although I like Kylie, I wouldn't swap my life for hers, just for a peachy bottom. She was being interviewed on a chat show a while back.
She was saying how she just wanted to meet someone nice and not be single. I think due to her treatment for Breast Cancer she's unable to naturally have children and at her age, she's pushing it a bit. She came alive when she was discussing her sister's boys and my heart actually went out to her a lot. I started pitying  Kylie! She was laughy and charming but I reckon on the inside she cries a lot.

What have I got to be lucky about?
I've still got my original HG. 23 years this December. We have two gloriously brought up ( hehehe ) offspring. We have a roof over our heads. We both work and are mostly well enough to do so. We do what we like and we like what we do!

Yes, I do the lottery. Money would make life easier for sure. But would it improve my actual needs? Nope!
What else do I need?
I need to show you my latest knitting! It's a new pattern where you knit the sleeves in with the front and backs! You should know how I hate knitting sleeves so I should enjoy this knit! There's no recipient in mind so far. I have so so so so much wool, that I think I'm going to knit little baby things and have a go at selling them on the old Bay of E!
This is a simple pattern so won't take long. It's supposed to be in DK but I went for chunky!
Hopefully I'll have more to show you next post! 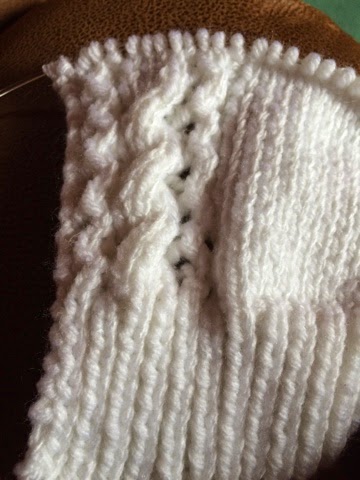 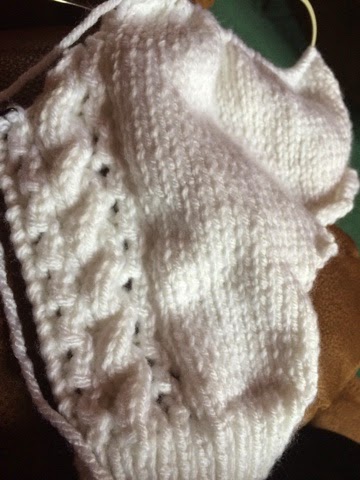