It sounds far more glamorous than it looked! I fancied baking a cake yesterday. I made a basic Madeira sponge ( it's slightly firmer than a Vicky Sponge ) . I used the utterly delicious Bon Mamon Strawbery conserve. It's v spendy, EXCEPT WHEN ITS ON OFFER , which is why I bought it. Some double cream and half a tub of ready made Betty Crocker buttercream frosting that I bought to try. One of my pet hates is making butter cream, even though it's Beryl who does the hard work. I rarely weigh out, so by the time I've creamed the butter till it's light and fluffy ( even when Beryl is going top speed it takes too long ), sieved in more and more icing sugar, tasting it, too thick, too thin, too buttery, too sugary etc etc I've made approximately 14kilos of the stuff. And feel so sick from tasting the same amount during manufacture!!
Which part of your hobby which you love doing, do you in fact despise?
For me the two that spring to mind are
Baking - buttercream making
Knitting - sleeves and finishing off weaving ends in.
Anyway......
I made it in two 8" tins and sliced each one in half, I should have done it in thirds for a more dainty looking cake! 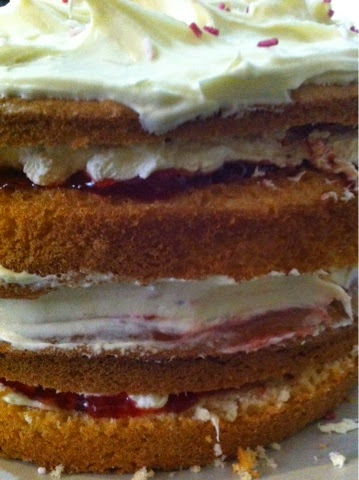 I think I will next time. Each layer had a thin layer of jam. Two layers had neat unsweetened whipped double cream, one had a thin spread of neat Betty Crocker stuff and the top was halfy halfy cream & Crocker. It gives it a lovely sheen. I couldn't be faffed with an icing bag to pipe so it got swirled on and peaked with the back of a knife. A few strawberry n vanilla sprinkles and Ta dah! 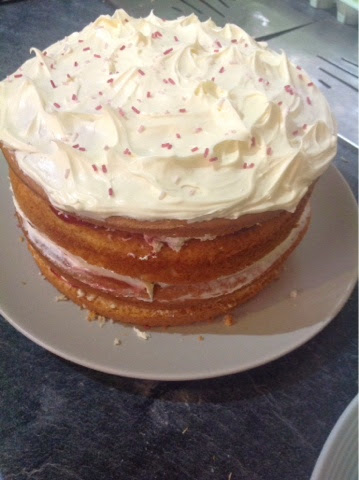 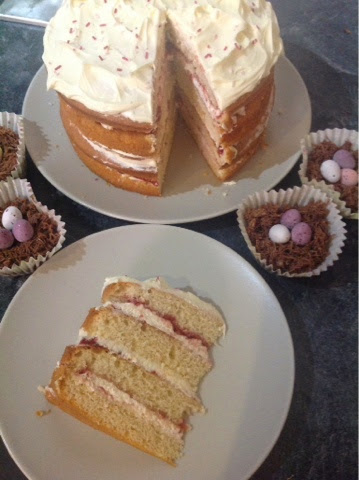 I also made some Easter Nests by crumbling Shredded Wheat into melted Cadbury's milk chocolate and topping off with mini eggs. Healthy and yummy!

Barry update - he is very cheeky and chatty. He loves eating fresh apple from your hand. I'm trying to teach him to talk so say the phrases Come on, Come on Barry, a billion times a day. Yesterday whilst he was out chatting his head off, I definitely heard a 'human style' whistle amongst his chirruping. I am sure the children at school will adore him! I don't adore cleaning budgie poop off my carpet. It's his least appealing feature.

The Uni one returns tomorrow for a week. I've seven lovely days with her till we all have to return to real life! Today am going out to a retail shopping place for a look! Dunno what the weather is doing. Have decided to let my garden run fallow this year. I think I'll do some beets in my pots though for the pickling in Autumn. I've grown different veggies in the same bed for a long time, each year it gets a decent thick layer of compost from my bin, but I want to remodel and change it around this year. I say *I* , I mean I want the HG to do the remodelling!!!

Anyway must get ready for the day :-)