It's day ( quickly counts up on fingers ) 9 and not one crisp has made it down my alimentary canal. NINE DAYS SANS LES CRISPS!

So, what am I doing to help with my quest for healthy eating without crisps. Oh crisps, how I love thee, you crisp, crunchy, salty potato disc of unctuous gorgeousness.
Ahem

I have been watching TV. ( My other favourite thing! ) and just what have I been watching? Well, Great British Menu where someone just fried a thin potato basket. NOM. Then The Fixer. Where the scary lady with impressive bosoms gets shouty and cross at hapless people who cry and get cross and eventually do what she says and they all live happily ever after. This week she is sorting out a FISH AND CHIP SHOP. Cue MANY close ups of golden inviting chips ( a close cousin of the crisp)

Clearly this is not enough punishment as I'm now mid cast off ( see pic ) agog at Greg < he's tweeted me a few times > Wallace and John < just look how he curls his massive gob around the spoon/fork because I can't STAND it > Torode cook a FRIED courgette flower. Do you know, I've not had a fried courgette flower for ages!* I love Masterchef. Its making me hungry! In my head, my crispometer is flashing dangerously! Its NINE DAYS EMPTY. Fortunately for my self imposed quest I have no crisps in. It's a good job. As far as I know there is no local branch of Crisps Anonymous operating round here.


The latest work is a little baby sweater- finished pics to follow!

In case you are wondering, my death row packet of crisps would have to be Walkers Cheese n Onion. I like my crisps nice and pale and lightly cooked. Brown crisps will not do. Am also partial to an onion ring but technically speaking , that's a snack!!
What's your flavour??!!!! 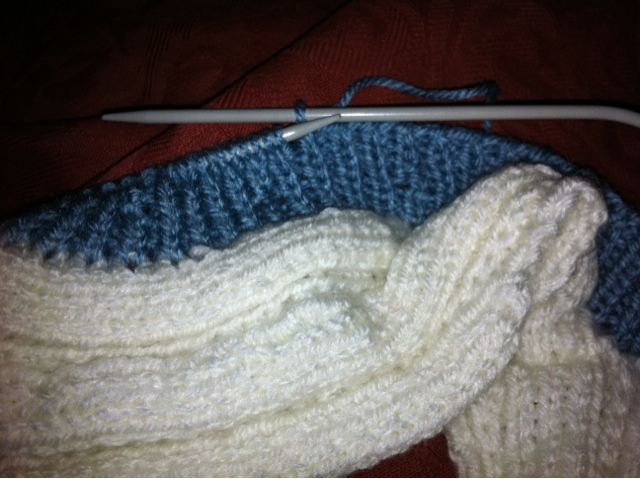