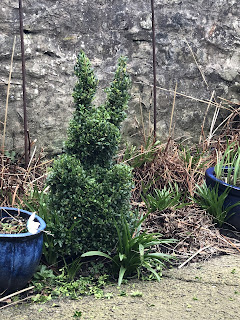 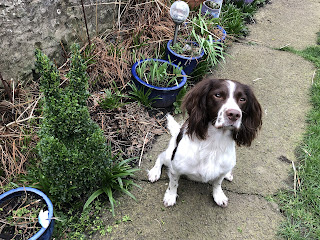 Le Weekend  - French for bloody hell those two days went fast. It was mild and sunny for some of it. I went outside and fettled in the garden- I’ve still much debris to shift and I had a go at the bunny bush. It’s bigger than Bluebell now. She was sent in in disgrace because she was playing the I found a stone Mum and I’m going to sit behind you and crunch it in my teeth and then pretend I’ve not got one by stopping when you turn around. Bloody dogs.

I’ve had quite a lovely one as it goes as usual. The only thing is I’m in a bit of insomnia mode. It’ll pass. It’s just so annoying. Also with the hair cut, one’s bags under one’s eyes are more noticeable! On Saturday night, The HG and I looked for something good to watch. We’ve a few Veras inc new ones stacked up, plus a few dramas that have been on TV lately. Anyway I flicked thru the various channels we have and settled on Chicago Fire. It’s pilot was in 2012. Well, it was just right, like baby bear’s porridge so we’ve watched it well into the first season! We are loving it!

1. The chief has a very deep whispery voice and he’s often just watching and knowing all the things. He also is permanently holding his collar, whispering things in to it. Or it could be his radio.

2. Bloody hell, you didn’t get this on London’s Burning. There’s trucks and 3 different sections of staff and a voice comes out of the sky saying what’s happened and where they need to go, This  always always always happens as they are about to eat/ having a deep and meaningful moment.

3. Everyone is beautiful. Or quirky/loveable

5. All of them have a back story, like a real baaaack story with issues.

6. All of them are really really good at staring into the distance moodily.

7. All of them are exceptional at making every damn thing look tough, they do it with a furrowed brow and a tough grimace to show us how tough they are/it is- even like, putting a ladder up a wall.

8. It’s a wonder there are any buildings left in Chicago the rate they get burned down.

9. They enjoy jolly good japes with each other.

10. They never EVER take the easy route -for example. They rushed to a sink hole in the road situation and there was a screaming lady with claustrophobia ( natch ) down said sink hole. Tough, gorgeous looking one ( with bad shoulder so on illegal prescription drugs ) shouts toughly to the others bring me a board. Now reader, I would have thrown down a hose , told her to hold on and reel it in, or pop one of my lovely long ladders down it and told her to climb up. No. The crew brought him two little boards to shore up the sides. Not enough. He says, toughly, with narrowed eyes. Hurry.

So next thing, two of the older quirky/loveable firecrew go and simply chop a lady’s garden fence down and use that.

Get back to the hole. Screaming woman now can’t breath and is up to her knees in soil, trapped.

5 minutes of close ups of narrowed eyes, gritted jaw clenching efforts with hydraulic wot nots and gubbins and then two firemen jump down and save her by attaching ropes to her and risk internal injury to her/possible ripping her apart at the waist as they yank her out of the soil as the stolen fence panels begin to collapse.  Lieutenant Badarm, generally has to hold somebody from falling with his bad arm. I sit there thinking,  well no way could I do that with my bad shoulder!

Anyway, they seem to go round the houses to get the job done!

I’m not sure how many episodes there are but it’s great!

Sat here with a cup of green tea, I’ve made the HG his packed lunch ( egg butties today ) and quickly putting this post out.  Bluebell is squeaking at me to give her her breakfast but she’s 12 minutes early! Not til 7 O’clock madam.

Yesterday I made a tuna and sweetcorn flan as I’ve been fancying one for a while. I washed the kitchen rugs and pegged them out. I put the online shopping away - I’ve fully stocked the cupboards fridges and freezers buying a few extra things that will keep so try and avoid higher prices - only a few basics.  Not panic buying, clearing shelves level.  I’ve sugar, cereal, tinned goods and one extra packet of loo roll!

Need to get some porridge and tuna in my next shop. Down the the last tin I noticed after making the flan.

Sunday tea was delicious- it was a roast chicken dinner, with stuffing, gravy, roast potatoes, mashed root veg, broad beans, cabbage and yorkshires. Pudding was profiteroles but I was strong and with narrowed eyes and a grimace,  I didn’t have any!

I’m off to put the recipe for my flan on my other blog now - think the link is in the side bar somewhere if you are interested and then get ready for work!