The most wonderful time of year....

it was finally here. It was an epic day  which involved a minibus, some over stimulated children, getting bitten ( Ouch that hurts, teeth are for food ) and due to some serious safeguarding issues that needed reporting I didn't get to finish at 2pm along with the rest of the school but was still away by 4 and it was still daylight, so that was good.

One of my gifts was this wreath...! Isn't it a great idea! I love the fact it is original and handmade. 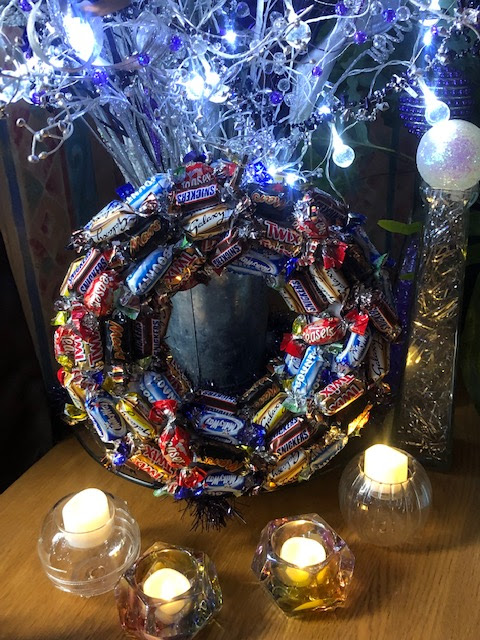 I have put the decorations up that are going up. I've changed a few bits and bobs round. 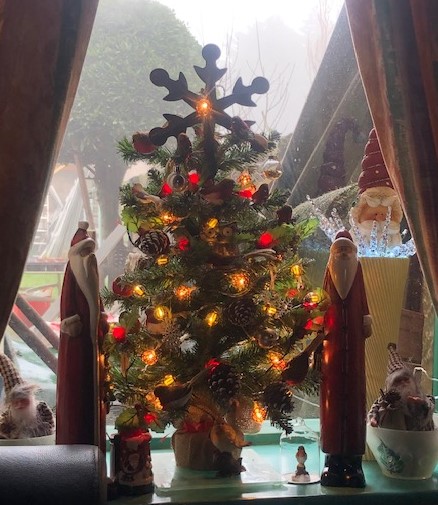 I treated myself to a new in the sale so it was a bargain tree for the dining room windowsill. Its my Santa spot and it is red and gold!  Much much prettier in real life. It's hard to get a good photo of Christmas decorations I think.
Miss 27 and Freddie and here for the festive season. Her beau has gone home to feed the fish and spend Christmas with his mum who has been rather poorly. So Freddie and Bluebell had a day out in the lakes on Friday with Miss 27 and her friend from Uni. They had themselves a little swim, despite being told no, much to the amusement of all the onlookers! Look at the gorgeous skyline. 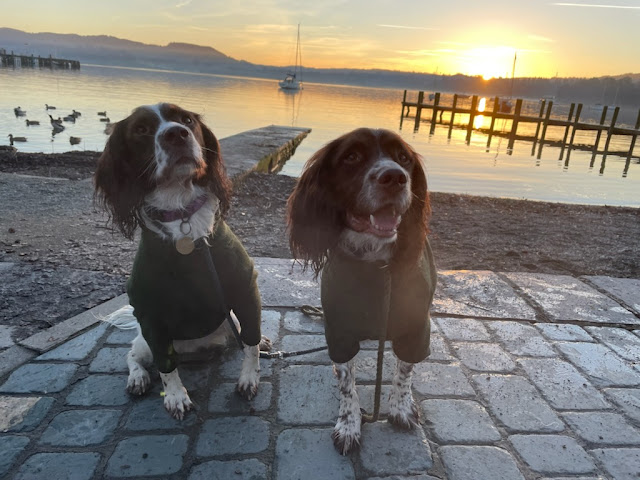 Freddie is sooooo beautiful. Sooooo is Bluebell! Those jumpers they have on are Equafleece and were worth every penny of the ££££ they cost! Plus they look very cute!
I have a story to tell....
Once upon a time, there was a stressed out of her tree menopausal woman on the edge just about to set off for work. She checked her coat pocket. Bugger it,  No keys. With a few swear words she systematically checked and re checked the pockets. Nope. No keys. With a few more swears, she stomped back into the lounge, tripped over the confused dogs ( why you back in??? ) and looked around wildly. Nope. Asked her offspring, had they seen/moved said keys? Every feasible hiding space was checked. Including coat pockets in case you know, the keys had miraculously re appeared. She pressed the tile alert thingy on her phone which is linked to the tile alert thingy on her keyring only to be told it needed a new battery! She said some very very bad swears.
She sat down and mentally retraced her steps.
She had come home from work in a rush to get in because she was absolutely on the point of wetting herself desperate for the loo - all the doorstep Riverdance jigging about ensued ( I have blogged about this before!! ) and she used her key to open the door, ripped her coat and cardi off and dropped it, her school bag and her keys and work keys were flung on the bag and coat and she ran like the wind upstairs*
Once composed and empty of bladder, she went back to the hall, hung up her coat and emptied her school bag including the three teatowels she had brought home to wash.
She then really retraced her steps, saying what she did out loud so Miss 27 could hear and assist. They searched everywhere and in the end the now hot and sweaty late for work woman on the edge said some more swears and went to work. She didn't actually NEED her keys as Miss 27 was going to be in with the dogs.  But now on the two minute walk to work, she started to worry that she had left the keys in the door and started to frantically to text Miss 27 to LOCK THE DOOR and keep her keys in the door because someone had taken her keys and was going to break in and steal the dogs! The poor frenzied woman got to work and then she received a photo... 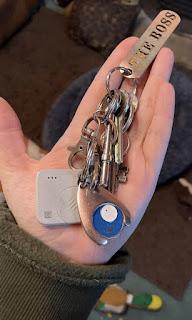 Where were they?
IN THE WRONG COAT POCKET! You see, because the woman ate all the pies she has two green coats hanging in the hall - the larger one she had ripped off to get to the loo more easily and the one she is striving to get back into.
She had put the keys in a green pocket. Just the wrong one!
and breathe!
The 18th December holds a very sad memory of my very very lovely friend who I first met age 11 in our first year at Grammar school. We then worked our first Saturday jobs together and even though life got in the way that strong bond of friendship meant we could pick up just as easily when we did see each other again. She had bowel cancer and no matter trying everything was told there was nothing more they could do. She died 12 months ago today, I have cried a fair bit today but I miss her everyday. so when the door went and a very lovely surprise arrived, it lifted the spirits. The HG's bosses had sent us a HUGE luxury hamper as a thank you to him for keeping it going during these difficult times. They didn't need to do that. But it really made me cheer up a bit. I contacted my friends who were equally feeling the loss and her sister and felt comfort in that.
Here is a photo of Bluebell and the pile of gorgeous goodies. 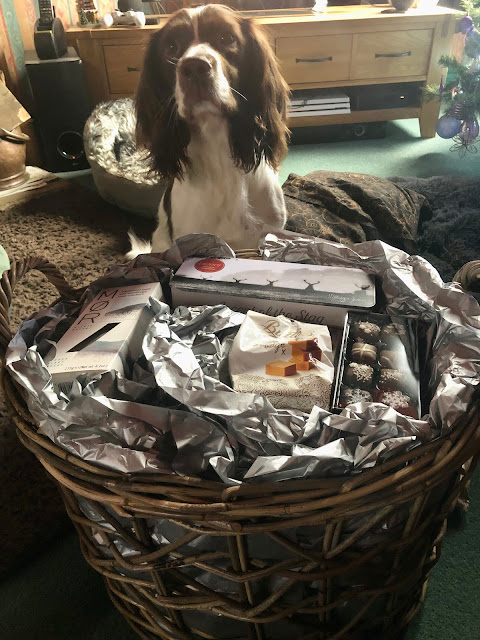 I just have to decide what to use the basket for afterwards! Ideas on a postcard please? ( or the comments section will do )
I'm thinking probably will house Bluebell's things! Or in my craft room. I don't think it will be sturdy enough for logs for the fire.
I'm going to finish watching Bridget Jones now even though I have watched it 78 times before and then go to bed. Speaking of watching things. I was gutted that my favourites in SCD had to pull out due to injury. I think all three were definite contenders and will enjoy the programme on catch up in the early morning tomorrow.
till the next time...
* staggered up as fast as she could with her legs crossed