Well I went back to school for the 17th ( or is it the 18th?? Hang on, nooo I think I started working at my current school in 2004, or was it 2003?? I can't remember ) I'm going with 2004 for sure so it is definitely AT LEAST my 16th but probably 17th September start at the school where I will work until I retire or die! Whichever is sooner, but I do see myself on playground duty on a motorised scooter as an old lady. Waving my stick, you, young man, stop doing that! In a crinkly old lady voice.
But new start, new role, new year all excited. It was a great day learning all about coaching and how to coach! The person who I practiced my new skills on said I was very good at it! And then the bombshell I knew deep down was coming, but I don't really mind. You see, my friend, whose Mum had the brain tumour is my friend because we work together. Sadly her Mum passed away on 12th August so she's quite rightly off work. So I'm temporarily covering some of her hours until her return. And it's in Y2. Which was my wish list age group when asked last year where I wanted to be... It's a LONG time since I've worked properly in Y2. I'd possibly relent to go as low as Y1 as a very very last resort. But Y2 they at least can mostly read and write! They are still very biddable and eager to learn - not like the Y6s who are old and wise. Also generally, Y2 don't answer back or give attitude! I do love Y5/6 though because sometimes you can just 'get on' as you explain what you want them to do, set them off and off they go all independant like and can mostly get through the morning without needing a wee. But a change is as good as a rest and a lot of the souls I'm enabling to learn in my new Pastoral role which will probably begin now after October half term, are actually in Y2 so I can start to forge good relationships and get to work on them in the classroom! Today is another INSET day. We've the killer morning long Domestic Staff Meeting and then after lunch, freedom in classrooms but I'm spending my time unpacking my belongings in my new base not Y2. I admit to being a tinsy bit 'meh' but I quickly got over myself. 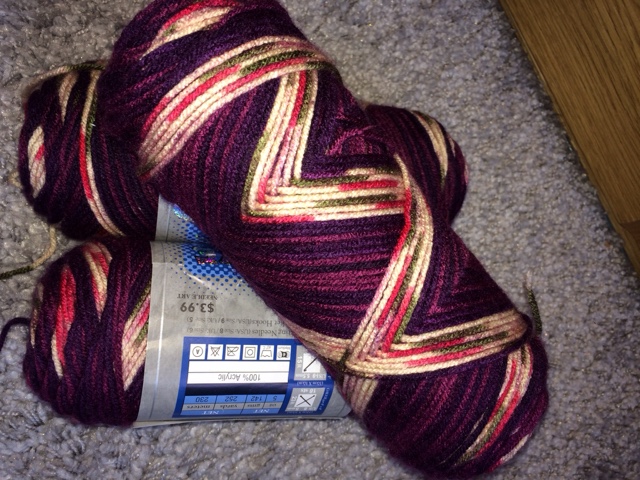 I jus thought I'd quickly show you some of the new bits and bobs I picked up last week in Skipton. This gorgeous wool was £2 a ball. 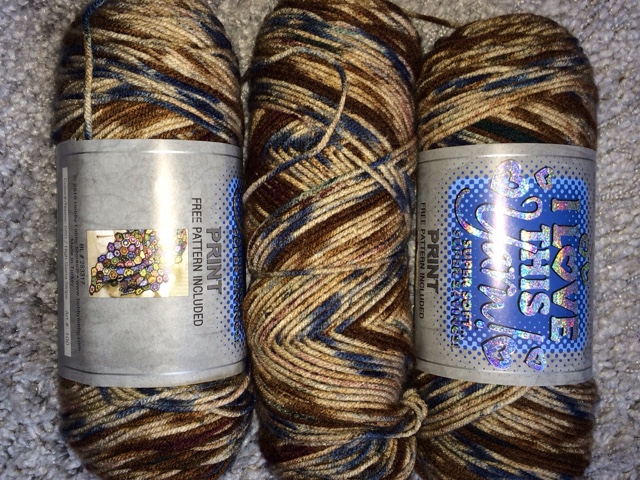 It's called, I love this yarn - AND I DO! There's also a free pattern on the bands - for crochet! Which you know I'm rubbish at. I'd originally picked up two balls of each, but decided to go get another of each because I just couldn't leave them in the shop! Also I wanted to make sure I had enough for what I have in mind once the HG's jumper is finished in 2020! Actually I've only one panel to knit now and will cast on the final 136 stitches later tonight. Don't be holding your breaths though for the show and tells, it'll be a couple of weeks yet.
I also got three more balls of the stripy wool at £1 a ball that I used to knit that little waistcoat I showed you. I love how brightly cheery it knits up. 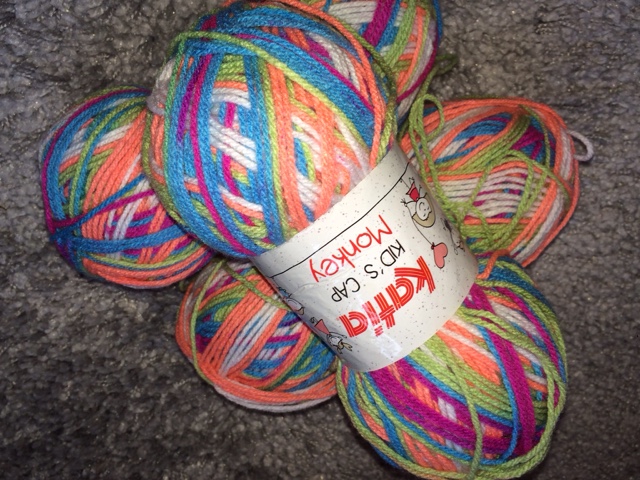 It's great little wool shop. It's round the corner where the big card factory shop is, opposite the milkshake shop, next to a charity shop. The traffic lights that you use to cross over to get to the Fent shop is close too. It is a little gem selling cheap books one side and tons of different wool on the other. If you know it, you'll already love it. I might also have bought some fat quarters from the Fent Shop and then some other bargainous pieces from The Shuttle at Shipley that day too.... I'm such a terrible stasher of yarn and fabric. But I only ever ever buy quality at cheap prices! ( defending my self - I will use this phrase when I'm featuring in a Channel 5 dicumentary on hoarding to ridiculous levels ).
I'm missing little Freddie so much! But a present from the HG made me excited. I don't care if this makes me a tragic middle aged old dear, but it is from Lakeland, so that's a big tick already and it's one of their HEATED CLOTHES AIRERS that I've had my beady eyes on forever. It was on offer and I also got a cover with it ( spoilt brat I know ) but it dries your clothes for around 6p a day! So I don't have to tumble everything - going to work can impede on my pegging out and very quickly my windows of drying opportunities disappear once Autumn kicks in. And it's kicking in already - I can tell by the amount of OMG sized spiders weaving human sized web death traps EVERYWHERE, betwixt EVERYTHING in my garden. I find that at this time of year if one doesn't get one's wash in by 4ish then it goes damp and there's nothing I hate more than a potentially good dry line of towels going damp on said line AND probably having peg spiders on them too by the time I get home just after 5.30pm on a good day. I've written about peg spiders before. For me, they are a year round phenomenon. My next door neighbour leaves her pegs on the line betwixt washes. How can she do this? If I ever leave behind an accidental one - if it's been the IT'S SPITTING dash, the next day, there's a flipping spider living in it. If I leave a full wash set of pegs out, then the lacy webs between said pegs are beautiful but go along the full length of the line with a spider in each pair of pegs. But where do they live when I don't leave my pegs out? She can't be bothered OR indeed have them, because there is no shrieking when she pegs out. It's bizarre. And unfair. So Thank You my darling HG for your gift of heated metal tubes, beautifully dry and spider free washing with no stress during these damp, dank and dark depressing months. 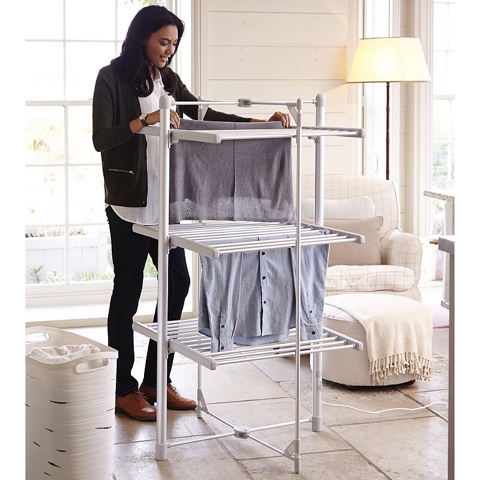