Again thank you for reading - I have gone over the 10k mark!! That's bonkers!

So your requests for my next post. An odd mixture - but here goes....

When my children were small, I would begin my Christmas shopping for them in January. I would squirrel away bargain finds all year, NEVER spending full price on their toys and clothes. They never knew. In fact I think I'd be hard pressed to think of something they ever had that I paid full price for!

Fast forward to the present day, I still hunt for gifts as and when for my little nephews and nieces, however, as I've lost brain power over the years, I forget that I've got things and find them after the event - so they get them for birthdays etc! Last year, I knit Lisa's Madeleine a stripey jumper and a matching one for her dolly! 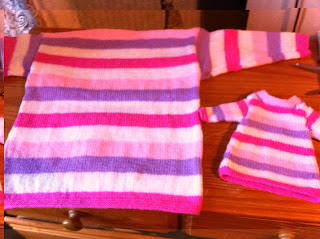