Hello dear reader ( s ),
This is a random post brought about by myself and my best friend ever Eryn chatting away as we do almost daily on Yahoo. We almost ALWAYS end up laughing our heads off - but as we get older I worry for us 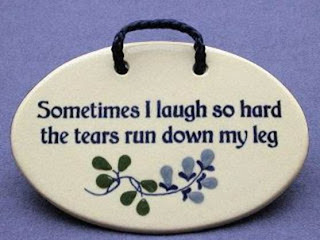 anyhoo here is a little of what we were chatting about. ( Goes to log into Messenger )
( Two minutes later )
O bugger - I can't get back far enough and it won't be as funny as what we were actually saying!
But we were discussing escalators and I disclosed the fact that, apart from the wolf under my bed, escalators are the ONE thing ( ok one of the ONE things ) that terrify me to death.
You know that horrible tummy flip you get when you are frightened? I mean proper scared. Like in the middle of the night; you hear a noise downsatirs, your man is snoring gently, you cannot wake him even though you are confused as to  how he can sleep through the THUDDING of your heart as it tries to escape your chest, that unmeasurable fear of stretching your hand to find the light switch in the pitch black, the knowledge that the mad axe man is on his way for your babies,  THAT  feeling about escalators or ESOD
is what makes my tummy flip and my irrational fear receptors go beserk!
I have really thought about this and I think THE most horrendous Safety Ad in the 70s is at the route ( I don't think I mean route but I cannot think of the right spelling or word! )  of my fears.
Actually no - My fears were set off before this!
I was the eldest chld of three.  I remember sitting on the top of a bouncy bouncy Silver Cross Coach Built pram -  in a pram seat designed to carry the older child. These prams were super bouncy and as my mum walked everywhere I remember being on the pram and we would walk over this bridge. 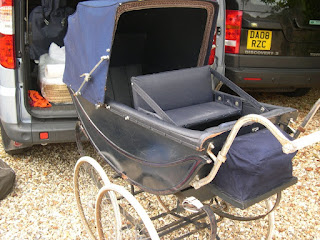 Sitting on a pram such as this  - Lisa was all snuggy underneath,  I would be perched atop the little blue seat - with the thinnest of flimsy straps ( they were proper reins of course but even at the tender age of three ish I knew flimsy when I saw flimsy ) . Going over the bridge in this rocking jalopy I could see right over the top of the walls and I remember screaming and creating with sheer and utter fear that I would fall off , OVER into the water.
The alternative was even worse. Not being strapped on the seat meant I could walk - and the screaming must have affected my mum as I was a "good little walker"  after a few traumatically fraught trips - but if you take another look at the bridge you will see it has fancy balustrades  with huge 'comfortably fit a child though' gaps. I wasn;t allowed to walk on the outside because of the traffic - so I had to hold the pram and walk past the thirty or so of these, each one causing a tummy flip as I KNEW I was going to slip through one and fall to my watery doom.
I HATE bridges. I hate anything other than terra firma. I  do think it's the bouncy pram.

~I need to have therapy and charge it to my mum because its tantamount to child abuse - that and the fact I wasn't allowed to have peddlepushers when I was eight years old - I was clearly a neglected child too.~


Gosh I am rambling on.  Soooo escalators. ( cross your fingers I can find the horror film I am looking for on you tube - back in a minute )

Actually this isn't the one that frightened me the most......
I can't bloody find it online.
Hello - are you still here ? I hope you are not too traumatised. The advert I recall was a little girl going up the escalator and a ragdoll was dropped and I think a worker picked it up at the bottom but all he picked up was the hair - because the girl obviously fell into the mecahnical stairs of doom and was scalped.  ( I will keep searching )
SOOOO  more evidence now - Because I was my Grandad's favourite, I would be taken up town by him as a treat - on the bus - no death defying bridge crossings - once we went  into Woollies which had a heart stoppingly MASSIVE escalator in the middle of the store and he went to go up on it, I slipped my hand out of his then of course screamed my head off because I was now lost!!
Its a wonder I can get out of bed in a morning with all this childhood angst.
When I was ten, our class went on a weekend visit to the Capital and one of our treats - [I am obviously going to put this in inverted commas, ] 'treats' was going on the underground. The Tube was fun.  The teachers lied to us. We'd never seen anything like it before in our lives. ( Again. I say FUN - I'd watched the public information films of the dangers of the Tube and how you could get SUCKED under and die a horrible mangled death if you got too close )
But to get to the underground, one had to go, well, erm, under the ground. The first station I was OK because there was just a really, really long set of steps down. Off we all went, crocodile fashion, one teacher at the front to thirty kids. ( With films like that above - we behaved ourselves and we didn't need the one - eight ratio we have nowadays ) ( We actually behaved anyway or we would get smacked!)
So our experience On the tube - ( once I was on the train - I was fine that I hadn't got left behind on the platform like we were told - because these trains are SO FAST ) we got off the train and round the corner I was faced with this. 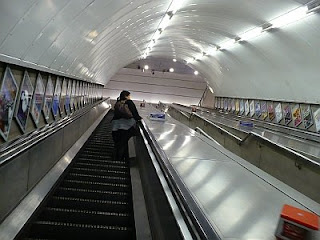 Well I got so nervous, clammy handed, I let go of my partner, statred telling the teacher I couldn't go on it, I was crying. So ....off went the teacher, 15 pairs of children behind her in twos - except the last pair wasn't a pair - because I'd wrenched my hand out of my partner's and stood at the bottom shaking with fear.
Now - doing the job I do now, going on EDUCATIONAL VISITS ( we don't go on TRIPS anymore)  I can only imagine what went through Mrs Read's mind as she looked behind her and saw one of her charges NOT doing as she had been told!
SOOOO, the teacher and all the twenty nine children had to come back down the down escalator , where by now a crowd had gathered around the poor hyserical little mite who was too scared to go on the ESOD.
The lovely, kind, concerned teacher, shook me, smacked my legs and told me what a silly girl I was. I refused to go on, I was doing that snot bubbling out of your nose crying - I probably was wetting myself in fear - but if I was , my brain has blocked out that part )
But a lovely gentlemen - I am pretty sure it was Clark Kent bedecked in a navy Undergroud outfit took pity on me and stopped the escalators and turned them into stairs. Safe, non moving, none welly destroying, hair ripping outingly stairs.
I'm laughing now as I am thinking how pissed off that teacher and ALL the class were that day because the stairs went on forever!!!! Bet she was knackered!! Fortunately the rest of the trip was above ground on a bus!!! I always wonder what other people's perspectives are of my stories. In the staffroom they'd have been talking about the little brat who wouldn't do as she was told!!!
So I have managed to avoid ESOD travel quite well into adulthood. Besides real stairs are healthier.
Till we took our kids on a whoppingly frugal trip to London a few years ago.
I got the train tickets for £52 return - two adults, two children. Booked us in at the Euston Premier Inn dirt cheap n kids ate breakfast free ( Fill yer boots kids) . Day one we got there at 9am - put the bags into the hotel and we set off on foot. I'd planned our first visit to the British Museum because it was close by. But then as the day progressed, we were following the sign posts that said covent garden 8 mins walk etc - so that by the end of the day we ended up at Buckingham Palace. Which if you look on the map - as I did - you realise its a BLOODY LONG WAY from where we started. Foot sore and knackered we made it back to the hotel and I did not sleep a wink because I knew we were going on the tube the next day.

First of my fears was my fat arse wouldn't get through the automatic gates!!
Then what happened everytime was  -   I made Mr Radio take our precious offspring and  make him PROMISE me  faithfully that he would be safe with them and make them hold on and not be silly and completely disappear out of my view and go down the escalator  before me - because just even THINKING about my babies on those death traps caused the tummy flip - so I was damn sure I could not watch them.
Then I would gingerly make my way to the Mechanical Monsters

Now in this present day with going up,  actually - I am kind of fine as long as no one is infront or behind or next to me - I need to guage the rhythm of the stairs and make sure I step on properly and once on I do not move - much to the tuts of daredevil extreme stair riders behind me,  until the top - where I get tummy flip maximum as I step off as fast as I can onto terra firma. It was the going down ones I had problems with.
That tummy flip was constant. It was like stepping off a cliff. My knuckles were white as I gripped the handrail. I did a lot of
" No really, after you "
But the thing with the underground is that Londoners go down them doing crosswords puzzles, reading books,  not looking, not holding on, RUNNING DOWN them. OMFG . Adrenaline junkies or what ?!!!
By day four I was quite au fait ( she lies ) with the tube travel.
Posted by Rachel Flowers at 16:26